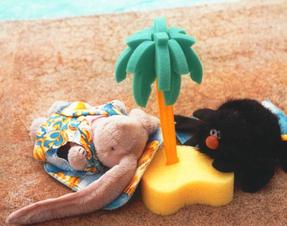 ​Bubb's tale, as told to Tash

I wish to state that a Guy is not a doll and is also not a stuffed toy, though you can find a Guy or two mixing in with the dolls and the stuffed toys put out on display at places such as as your local drugstore or the airport gift shop that are tipping their hats to a big shot like Santa Claus or the Easter Rabbit. A Guy does not turn up the nose at a crowd of gift shop dolls if the atmosphere of the place is festive and there is maybe a chance at some loose candy.

Now, when my pal Bub finds this Bunzini in a pile of stuffed rabbits at the local drugstore, he does not know Bunz is a Guy or that there are additional Guys nearby. And of course he does not yet know Bunz's name. He just has the irresistible urge to take home this Easter rabbit that has a chocolate carrot attached to it with a piece of elastic. Also he picks up the rabbit sitting next to Bunz. See, around Easter, Bub has a strong yen for a chocolate carrot or two, so at first I think he picks out the chocolate he likes and the rabbits are just the come-with. At the time, what we do not know is that it is the Guy who picks Bub out.

"That's me, Bunzini, in the front of course, in my baseball uniform and sunglasses!"

relaxing by the pool in Maui with their

In fact, the first time Bunz starts talking to Bub and me, it is a good deal later. We are driving home from a so-so lunch at an establishment up the street. Bunz is in his red travel bag, and Bub and I are handicapping this establishment to see if we try it again or kiss it off. It is not an easy call because the place is part of the neighborhood and is very attractive and inviting, except for the food. We want to support a local business, so maybe the review runs on a little.

​And we hear a gruff voice from the red bag speak up: “Forget it, Bub! We're not going back.”

Bub and I look at each other. You do not expect to hear a voice like Edward G. Robinson in Key Largo coming out of a travel bag that contains the rabbit that, for some inexplicable reason, you are now in the habit of taking out for the air. It is also quite a shock to realize that we are going to do what the rabbit says, and we do not go back. Yet as far as we can tell, the joint prospers without us.

Now, the day comes when we go past the joint again and see that it is closed. For this we are sad, as we do not wish them ill, but the rabbit says, “Quit sobbing, Bubb. It was no good.”

This is maybe a year later. By that time, we have heard a lot of rabbit opinions. This Bunzini is a good talker, and as far as opinions go, I would say he owns the mint.  For a time we try to share our opinions because fair is fair, but he shows no interest.

With all this rabbit ego, we are surprised to find that Bunz is glad to meet new Guys. Indeed, he wants for me to tell you about the second Guy who shows up, and that Guy would be Webster the spider.

This is in the October after Bunz moves in. I am at the grocery store, and because of the date you can figure that the place is done up to honor The Great Pumpkin. I am stopped in my tracks by a gusher of fuzzy black spiders with adorable orange noses. They seem to be jumping all over each other, so I am standing there dazzled.

Now let me make this point: once you know that Guys exist, it is likely that Guys are onto the fact that you know, and they will talk to you and generally do things to get your attention. There are also some Guys that are very well brought up and do not like to speak without an introduction. So I am looking at these spiders, quite overwhelmed, and thinking “What on earth? How do I choose just one” when this Webster, he jumps into my hand, quiet-like. He says nothing but has very soulful eyes. Well, I fall in love with him right there in the aisle and bring him home.

I am not so sure that Bunzini is going to appreciate a new Guy and might be jealous. But as it turns out, they get along better than you could hope, and become the best of friends. We find that Webbie is a scholar, and the number of things that Bunz can tell him about is difficult to estimate.

We start calling them “the Guys.”

“Let's take the Guys!” we say, as we start out for the movies.

Going out to eat? The Guys go too, in their red travel pack.

A trip to Hawaii to visit Bub’s dad? Of course the Guys come too. This means I have to get them packed and ready, and Bunzini, he is a clotheshorse. He has a couple of suits that I tailor for him already, a wool and a pin stripe. All well and good, he says, but now he needs vacation clothes: a Hawaiian shirt, of course, and beach shorts. I buy a straw hat for the spider, so then the rabbit wants one too, and sunglasses. It is a job to find them the right size, but you don’t want a pissed off rabbit on your trip, and I finally find sunglasses. The hat I find much later, but lucky for me he is very contented with sunglasses.

So it’s years later now, and I look around and see how one Guy leads to another, and if one of the Guys is Bunzini, there is a lot of work for me, with new clothes, and stories and a website, and Instagram and holiday cards every year, and so on. And if you wonder why this is so, Bunz will tell you about his Contract.  There is a lot in this Contract he has. In fact I am not sure what is not in it, since he will always tell you something new. Also the Contract says that nobody needs to see the Contract. I would like to have a contract half as good as his, but I do not know how to get one. Bunz does not have to tell me who the Contract is with.

Well, what I have discovered is that there are Guys all around. If you are lucky, and don’t mind some work, they start to be a big part of your life. It is a good thing if you start, like we did, with a Guy who knows how to pick out the others. Bunz makes the call for us when we are not sure, because this thing of a Guy having a soul is not always easy to spot.

Still, a real Guy will call to your heart. Very often this Guy is a Rescue Guy. This is a Guy living the hard life on the street: maybe lost or maybe this Guy has been tossed out by a mean-spirited human because he is chewed up or worn out a little in spots and maybe, to the uneducated eye, looks done for. These Rescue Guys, they always get a break with us. A Rescue Guy gets a good bath and a warm place to dry off, and if they need it, some mending, like a new ear or a few stitches for a torn nose, and sometimes a new leg. It is a lot of work but these tough street Guys have deep hearts and make great company. Bunz will always welcome another Guy, if only to agree with his opinions.

It turns out there are Guys and Rescue Guys around everywhere, if you pay attention. You may already have a Guy. He or she understands you, listens to you, gives you advice, tells you when you are being a ‘nidiot’ —

—this a step lower than being an idiot. Your Guy travels with you. Maybe you post pictures of this Guy, pictures of the times when you meet visiting Guys, such as the two hedgehogs we met from Germany—

More about ME, Bubb!

—Of course, the first Guy was Bunzini. In the photo at the bottom, Bunz is in the front there, wearing his Team B uniform and those sunglasses. Some people might wonder—

Forget it, Bubb. Just tell them to read my stories. They’ll see. We're not stuffed animals. We're Guys. We have busy lives.

Webbie! How many spiders wear straw hats and love reading books and Queen Latifah and Marilyn Monroe and donuts?

And how many rabbits have Hawaiian shirts and three suits, including a tux, and a baseball uniform and vacation clothes?

Just you, am I right?

YES! Because we're the Guys, Webbie. And not everyone can be a Guy.