Another Fun Birthday Party with the Guys!

​It's Bunzini's birthday, so we are having pie, his favorite! 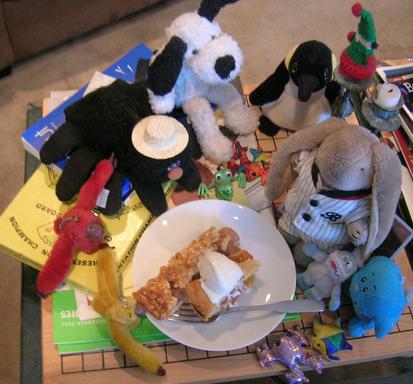 So you should ask!!

We are Bunzini's people. It's in his contract: we are the people and do all the dirty work. A little crazy you might say, and you would be right. But you can't make it through this life without being a little crazy.

This website is  about the world of Bunzini and the Guys. Over the past not-so-few-anymore years, we have found ourselves surrounded by Bunzini's world. It began around Easter 1996, when two rabbits - Bunzini and Noisey B, moved into Bubb's life when Bub brought them home. (There's a story about that, the eBook is available on Amazon). A few months later, Webster showed up. Then Eddie came into the picture, and finally Tash. And here we are!

More about Bubb at loucook.com.

Eddie does all the drawings.

Eddie and Bubb took most of the pix.

Some photos are historic--probably our parents took them.

Tash does lights for the photos, and wrote "What Is a 'Guy'?" He is also the editor of "Murkey's, A Rabbit Noir."

Bubb writes the stories, builds the website, and most everything else.

Bub brought BUNZINI home and started it all in 1996! Thank you, Bub!

Everybody contributes the ideas that make this real.